Here you will find our combined knowledge on topics such as Breathing, Meditation, Natural Movement, Natural Running, Stress and much more! You can use the buttons below to navigate to your desired field of interest. You can also visit our Blog Page to find much more topics that we dive into.

If you have suggestions or topics you would like to be included, let us know! We are open for feedback!

Check out more of our Content using the buttons below. We hope to provide you with as much value as we can, if you have questions about certain topics, don’t hesitate to reach out and we might include it here in the future.

Our holistic approach to health, fitness and performance

We believe that health can only be achieved through a holsitic approach, including fundamental aspects of our lives. This is absolutely essential to living a healthy life.

What are these fundamentals?

All of these fundamentals need to be viewed within the CONTEXT of your lifestyle, such as looking at how long and how we sit every day. How much we are exposed to sunlight and how pollution influences our health.

Most people today are unhealthy because we expose our body to a modern environment and stimuli that our body is not evolved for. This is known as the Mismatch theory.

Before we dive deeper into the mismatch theory, we need to mention that we are not of the opinion that progress is generally a bad thing. Our modern technology has many amazing benefits, modern medicine is amazing at solving certain problems, but there are certain limitations that currently negatively influence millions of lives and we attempt to provide a solution that can help you to improve your health and your performance.

So lets dive into the mismatch theory! 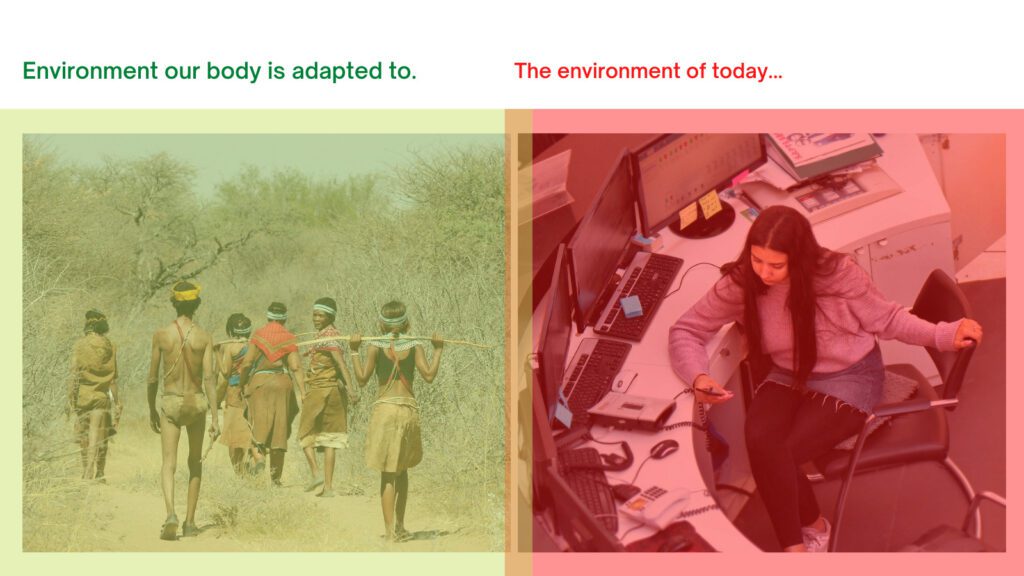 The Mismatch theory is described as “the idea that traits that evolved in an organism in one environment can be disadvantageous in a different environment”.

To quote Daniel Liberman in his excellent book the story of the human body:

“The idea behind the mismatch hypothesis is extremely simple. Over time, natural selection adapts (matches) organisms to particular environmental conditions. A zebra for example is adapted to walk and run on the African savanna, to eat grass to run from lions, to resist certain diseases, and to cope with a hot, arid climate. If you were to transport a zebra to where I live, New England, it would no longer have to worry about lions, but it would suffer from a variety of other problems as it struggled to find enough grass to eat, to stay warm in the winter, and to resist a new set of diseases. Without help, the transplanted zebra would almost certainly get sick and persih because it is so poorly adapted (mismatched) to the New Englad environment.”

Now lets apply that to humans. Instead of being transplanted, we have changed the environment around us over the last 10.000 years through agriculture. Especially in the last 200 years. The change of our environment was much faster than we could adapt through evolution.

This confronts us with diseases, challenges that our body is not adapted for. The ilnesses that emerge through the mismatch of environment to our evolutionary adaptation is what is known as Mismatch diseases. It is about the interaction between our genes and our environment.

Mismatch Diseases and the problems they create for us

One of the characteristics of mismatch diseases is according to Lieberman, that the cause and effect are often not immidiately obvious and it can tke years for the effect to take place. This makes it hard to prevent and indentify the crucial factors and often leads to the delay of required counter measures.

The problems of musmatch diseases affect most population groups of the world, especially in the west, where technological changes have made the biggest progress.

What are these changes in our environment that our body is not adapted for?

Here are just some of the environmental changes that drive us to different behaviour and influence our bodies in ways that we are not adapted for:

What mismatch diseases are there?

Here are just some of the suspected mismatch diseases that are either caused or  through our modern lifestyle:

And that is not all of them. Kind of scary right?

Lieberman mentions that “given that, heart disease and cancer are responsible for more deaths in developed nations than any other disease, you are most likely to die from a mismatch disease. Furthermore the disabilities that are most likely to lower your quality of life as you age are also likely to be caused by evolutionary mismatches.”

This means that all of us are affected by mismatch diseases in one form or the other. So what can we do about it? 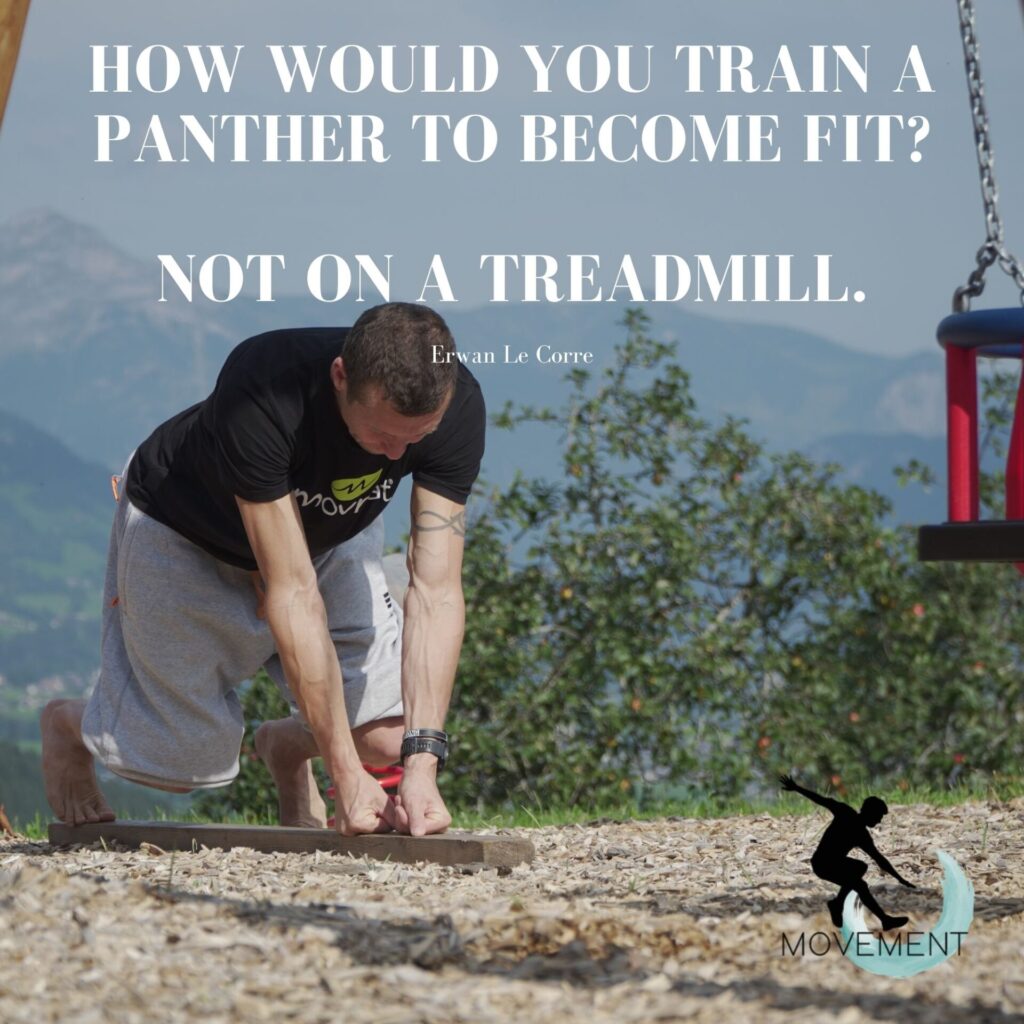 What can we do about it?

We know that this sounds and is really scary. And it is one of the biggest challenges that we need to adress as a society and in our individual lives. But there are measures we can take to mitigate the damsge and to start living a healthy life and to regain control over our bodies.

This can be as simple as:

As you see there are many measures we can take to live a healthier life. But it is not easy in an environment that is very unhealthy and constant temptations that are the more comfotable option.

We need to redesign our lifestyle in order to become and stay healthy.

We hope to be part of that journey for you to regain control of your health and to PREVENT the impact of mismatch diseases.

We use cookies on our website to give you the most relevant experience by remembering your preferences and repeat visits. By clicking “Accept All”, you consent to the use of ALL the cookies. However, you may visit "Cookie Settings" to provide a controlled consent.
Cookie SettingsAccept All
Manage consent

This website uses cookies to improve your experience while you navigate through the website. Out of these, the cookies that are categorized as necessary are stored on your browser as they are essential for the working of basic functionalities of the website. We also use third-party cookies that help us analyze and understand how you use this website. These cookies will be stored in your browser only with your consent. You also have the option to opt-out of these cookies. But opting out of some of these cookies may affect your browsing experience.
Necessary Always Enabled
Necessary cookies are absolutely essential for the website to function properly. These cookies ensure basic functionalities and security features of the website, anonymously.
Functional
Functional cookies help to perform certain functionalities like sharing the content of the website on social media platforms, collect feedbacks, and other third-party features.
Performance
Performance cookies are used to understand and analyze the key performance indexes of the website which helps in delivering a better user experience for the visitors.
Analytics
Analytical cookies are used to understand how visitors interact with the website. These cookies help provide information on metrics the number of visitors, bounce rate, traffic source, etc.
Advertisement
Advertisement cookies are used to provide visitors with relevant ads and marketing campaigns. These cookies track visitors across websites and collect information to provide customized ads.
Others
Other uncategorized cookies are those that are being analyzed and have not been classified into a category as yet.
SAVE & ACCEPT
Select the fields to be shown. Others will be hidden. Drag and drop to rearrange the order.
Click outside to hide the compare bar
Compare
Compare ×
Let's Compare! Continue shopping